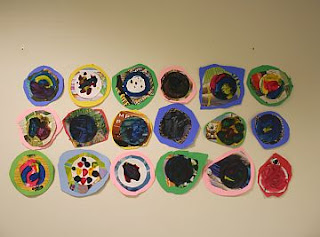 Cornerspring's art theme this year is Early American arts and crafts. One reason that I chose this big idea is to show students the practical side of art; how our fore mothers and fathers created things out of need, but made them attractive because of a desire for beauty in every day life. I also thought it would be neat to expose children to our country's beginnings through the study of its art.

One of our first school wide projects was the making of penny rugs. In the early days of our country, scraps of fabric were saved from old clothing, flour sacks and blankets to make these rugs, which were assembled from a series of "pennies" sewn together. In olden times, pennies were actually the size of quarters and these coins were used to trace circles onto fabric for the start of the penny rug pattern. Pennies were occasionally sewn into the rug to help it lie flat on the floor.

In the Cardinal and Chickadee classes, students made penny rugs from paper. Each student painted a paper "penny," then layered it from paper from magazines and construction paper to imitate the layers of cloth that early rug makers would have used. Each student also glued a penny between two of their sheets of paper. We then hung all of our pennies together on the wall to make one big penny rug!

Robins and Ravens made their penny rugs from fabric. Students were invited to bring in old clothes to use in their pennies. The first layer was muslin that students painted and then cut into four pennies. The next layer was a solid fabric, followed by a calico. The final layer was felt. These were all cut out and sewn together by the students. It is lovely to see all the different color arrangements as they hang on the walls at school!